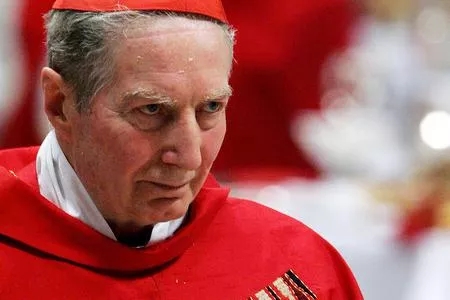 Who needs the old Progressivist desire for a Third Vatican Council to mitigate Church teachings when they can have almost anything they want from Francis, in this instance an incremental permanent synodal Church? A lot of the infiltrators who treacherously maneuvered their way into the highest church positions by pretending to be pious and loyal sons of the popes are today carrying out long-held plans. And they will continue to do so until God raises up a restorer who will put them, living or dead, to flight.

Edward Pentin of the National Catholic Register wrote, “The former cardinal-archbishop of Milan [Jesuit Cardinal Carlo Maria Martini], a favorite of those pushing for heterodox reforms in the Church, had envisioned a permanent synodal Church in which the idea of collegial governance introduced at the Second Vatican Council could be better realized.

The Jesuit biblical scholar, who died in 2012, “had a dream” in 1999 of a Church capable of being in a permanent synodal state, with a “collegial and authoritative exchange among all the bishops on some key issues.”

For Cardinal Martini, those key issues comprised “the shortage of ordained ministers, the role of woman in society and in the Church, the discipline of marriage, the Catholic vision of sexuality, penitential practice, relations with the sister Churches of Orthodoxy and more in general the need to revive ecumenical hopes, the relationship between democracy and values and between civil laws and the moral law.”

In a later interview in 2004, he said he also saw the Synod of Bishops — as Pope Francis does — as an important element in a less centralized form of Church governance.

Rather than argue for a Third Vatican Council, he believed his vision of a permanent synodal Church would not only be more in line with the Second Vatican Council’s call for collegial governance, but an effective vehicle for introducing the key issues he mentioned.” — Permanent Synodal Church — A Progressive Jesuit Cardinal’s ‘Dream’ Come True

The Alleged Synod on Synodality

By Swiss Bishop Marian Eleganti, who served as an auxiliary bishop of Chur from 2010 to 2021. [Headings and emphasis supplied here]

The Church has not been on the wrong track for 2000 years to be enlightened and corrected in our days by a synodal process in the 21st century. For that, we need neither a third Vatican Council nor a slimmed-down substitute event called the “Synod on Synodality.”

I thought, as the title says, that the topic to be discussed would be “synodality” as a supposed new modus operandi of the Church. But no: instead, it is again about the same synodal leftovers warmed up for the umpteenth time since the ‘70s: democracy, participation, involvement in power, women in all offices and the diaconate of women or priesthood of women; revision of sexual morality regarding extramarital sex, remarriage, and homosexuality: doing away with priest-centeredness in liturgy, etc. We all know this.

The repeated proposals are poured over and over into new bottles on which the labels “Listening,” “Inclusivity,” “Welcoming,” “Diversity,” [and] “Equality” are now pasted into a kind of marketing campaign that sells yesterday’s produce as fresh and sells it politely to the man or woman. They are all nice-sounding, emotionally positive terms, but they are empty phrases in relation to the truth or correctness of a position that is at stake. When it comes to theft and speeding, we are exclusive. Apparently, it is only in doctrine that we must not be.

Besides, in the Gospel and the words of Jesus, there is clearly “exclusivity.” There people are excluded from the wedding hall or are thrown out of it to a place where weeping and gnashing of teeth prevail. These are the words of Jesus.

I would remind them of Matthew 25 (the Final Judgment). Now God is sold to us as the all-inclusive love which approves everything and blesses what people do because all are children of God. Such a God ceases to be the Truth and Justice which are often exclusive, excluding error, and sin, and those who do not refrain from the latter. At least, this is what Jesus says. But they do not stop even before Him.

Apart from that, the synods since 2014 have also brought the aforementioned issues into play, and the majority of them have been badly negotiated, which is why they are being put back on the grill again until they are finally eaten [Translator’s note: a German-language idiom].

This has nothing to do with a Spirit-filled process of reform. It is nothing else than the inner-Church politicization of these topics in contrast to the discernment of the Spirit, which is not even being undertaken in this regard or has already been undertaken and concluded, e.g. in the question of women’s priesthood. Otherwise, one would have to reject positions that obviously contradict Church teaching and tradition and not continue to promote them. That would be real discernment. Discerning, however, only appears to happen because the agendas have been set from the beginning (cf. The Synodal Way in Germany and its bad copies in other countries such as Switzerland) and are now to be advanced universally and the opposition is to be softened after a long so-called reform backlog under John Paul II and Benedict XVI. Any child can see this.

The hypocrisy is boundless. For 60 years I have been experiencing and hearing only old familiar things ad nauseam in this regard because things get neither better nor more convincing by repetition. What have been perfected are sophistry and semantics. [Bishop] Bätzing has become exceptionally good at this. The wrong ones are dismissed. The Rock of Peter is a shifting dune that goes along (syn-odos), hardly at all or hesitantly but does not really create clarity. And that clarity that his predecessors and the previous ecumenical councils created is no longer accepted. This is also true for texts of the Second Vatican Council, e.g. on the priesthood and the episcopate. Instead, one pretends that this continues to be a matter of doctrinally open questions.

— The Synodal Way: ‘quasi-Marxist content in a spiritual comfort blanket’

— No More Traditional Priesthood A Goal for Some!